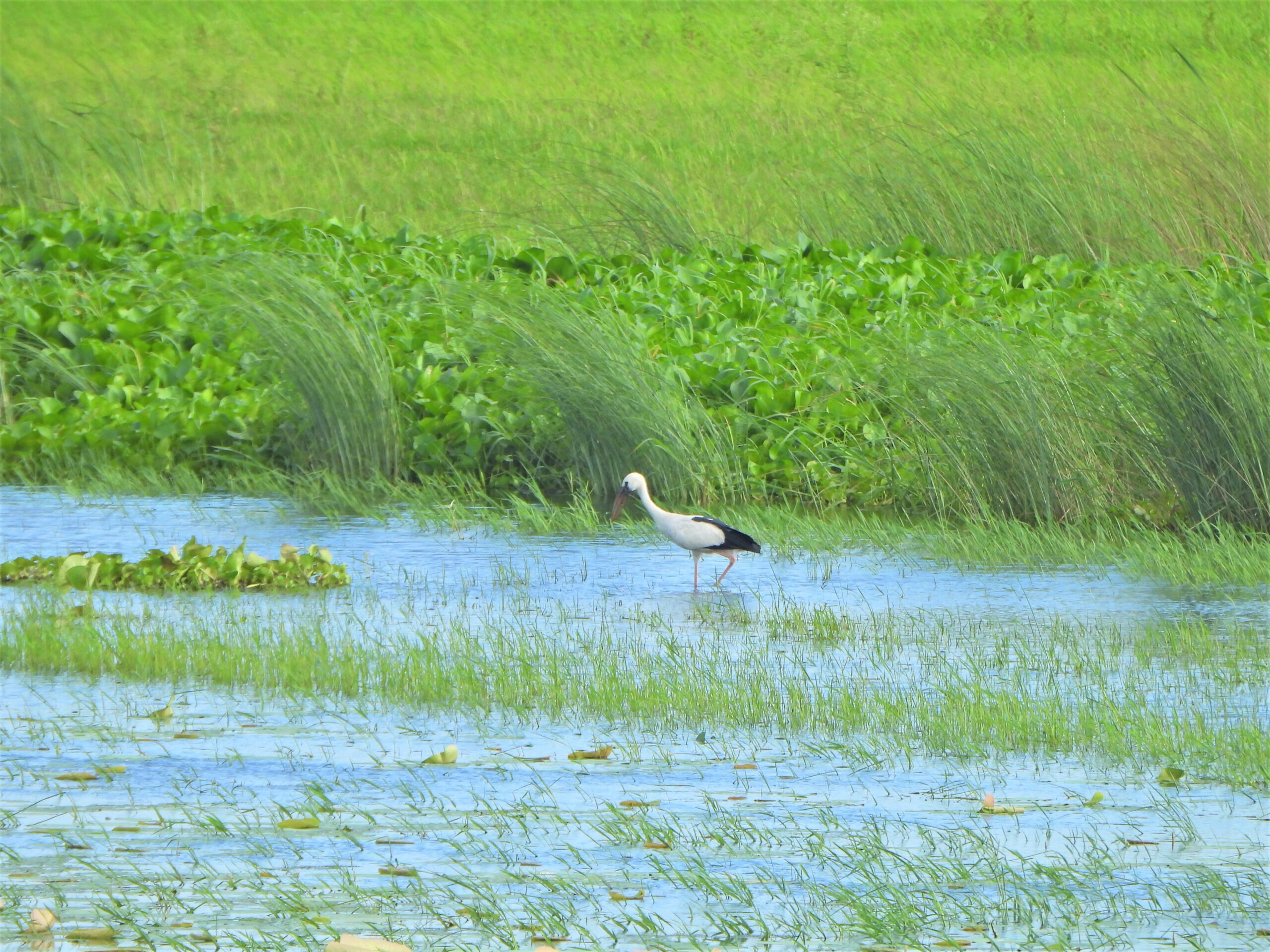 Koshi-Tappu: A wetland haven and its people !

By Abhishek NarvekarFebruary 22, 2022No Comments

Home » Koshi-Tappu: A wetland haven and its people !

‘Momos! I’ll have a plate of veg momos, please’. I was excited to finally visit Nepal and in a very stereotypical manner ordered the most-coveted dish of the country. But by the end of my field visit, I had learnt that Nepal is much more than just mountains and momos. It is as complex as you and me, and one will find beauty not just in the gorgeous landscapes the country has to offer but also in its people. Koshi-Tappu is situated in the eastern Nepal and within it is present the Koshi-Tappu Wildlife Reserve (KTWR), established in 1976 and declared a Ramsar site in 1987. The topography of the reserve changes with each monsoon as the Koshi, the river that flows through the reserve, is known for is meandering ways and ever-changing channel courses. The site was provided a wildlife reserve status primarily to ensure protection of the last-remaining Asiatic wild buffalo (Arna) population in Nepal. The reserve is also home to other important species such as the Asian elephant, fishing cat, gharial, mugger, wild boar, and the Ganges river dolphin. However, over the years, KTWR has seen a sharp decline in forest cover and a contrasting increase in grasslands (Chettri et al. 2013). The annual floods that occur in the area pose a threat not only to the fauna and flora, but also to the vast community that is directly dependant on the river ecosystem for sustenance. One such flood in the year 2008 caused considerable damage to livelihoods and biodiversity, and is only just showing signs of recovery (Khatri et al. 2010). The KTLG team inspects a wetland that is almost entirely covered in Typha, a sign of possible eutrophication. Photo: Amrita Sardar

Koshi-Tappu owes its existence to water, and all those living here depend on this water either directly or indirectly. Wetlands, which are often considered as sponges of the natural world, are in plenty in Koshi-Tappu. Sadly, however, these wetlands are slowly disappearing from the landscape because of eutrophication, over-use, lack of management, and extensive grazing. The local communities, mostly marginalised, are heavily reliant on these wetlands, some even for their day-to-day food needs. With lack of opportunities to circumvent or reduce the pressure on wetlands, these communities are left with no choice.

Having considered the sensitivity of the current situation, Koshi Tappu Learning Ground (KTLG), a local organisation, is attempting to build a community-centric approach to manage the wetlands in a way that both the biodiversity and the indigenous people benefit from it. Members of the Hattisar Forest Camp and KTLG transport a boat to the Hattisar wetland for help with data collection. Photo: Amrita Sardar

KTLG, one of the learning grounds of KTK-BELT’s Vertical University, aims to catalyse new models of biodiversity conservation and environmental learning in eastern Nepal where local farmers become ‘professors’ who share their indigenous knowledge while also physically conserving threatened species and landscapes. KTLG, though newly established, has already shown tangible results in  engaging with local communities via livelihood, education training, and workshops for sustainable use of local commodities and wetland restoration. Additionally, KTLG is also mapping the ecotourism potential in the region, given the region’s former tryst as a sought-after birding destination. Happy faces of the KTLG team after a successful day of work in the Hattisar wetland. Photo: Megha Rao

My trip to Nepal was focused on collecting preliminary data on some of the wetlands in and around KTWR, which were short-listed for restoration. This included visiting several of the wetlands in the area, talking to local community members who live around and use the wetlands, and assessing the wetland’s restoration potential with the KTLG team. It is evident that the local communities are deeply intertwined with the habitat around them, be it for their sustenance or their cultural and traditional associations with the wetland. The women of the Sardar community who live here are well-known for making handicrafts and daily-use items from the pater (Typha) and jal khumbi (Water hyacinth) that grow in the wetlands. The local community members may have varying answers when asked about their relation with the wetlands. Some may say they are important while some may say that they have not paid much attention to the wetlands and do not know their importance. However, ask them what fishes are found in the wetland and you will see an instant sparkle go off in their eyes that is hard to miss. One will then be told of tales of the many fishes found in the water around them—how do they taste, how many will you catch in a go, what molluscs to make chutneys with, how much patience is needed to catch an eel, what their favourite fish is, and so on. And it is in these instances you realise that their connection with the simar (wetland) run deeper than it looks. Not all local community members may actively realise and be able to specify their associations with the wetlands, at least those beyond the obvious, but it is not difficult to understand the underlying ties they have with the habitat during conversations with them. KTLG team in consultation with local community members over some chai and biscuits. Photo: Amrita Sardar

It is in such conversations you also realise how the land must have changed over the years. Fish stocks have reduced, migratory birds have gone down in numbers, farming is getting difficult with changing climate, and kids are being sent to far away cities as the parents do not want them living the same lives as they do. There seems to be a struggle in integrating progress while also retaining local knowledge; something that most of us across the world seem to be grappling with. There clearly is a need to make the local community here more economically stable, but while also ensuring that they do not lose generations worth of endemic knowledge–which sadly does not fetch the majority a livelihood. Such challenges are known to conservationists and KTLG seems to have made the right start with it in Koshi-Tappu. The task is certainly an uphill one but the gusto of the team here can turn any pessimist around. When I learnt that I would be visiting the wetlands in the Koshi-Tappu, I honestly did not know what to expect, and I certainly was not expecting to be treated with the warmth such as when one visits their grandmother’s house in the summer. Every member of the team at Koshi-Tappu brings in a unique perspective into the work that they are doing and are hence an efficient group. As I prepared to leave Nepal, I was stoked to receive a big bag of homemade sel rotis, two bags of gundruk (fermented radish leaves), one T-shirt from the KTWR, and a beautiful pen stand, made by Amrita from KTLG, using water hyacinth from the wetlands. My visit with KTLG was short, but I genuinely enjoyed being a part of the team and sharing their infectious passion to bring about a change in their community and to conserve the beautiful land they live in.

‘Phir se aayiyega Megha ji. Tab aake hamare KTLG ka homestay me rukhiye’, Rajkumar Sir said asking me to come stay the next time around in the homestay that KTLG is planning to promote.

Well, you do not have to tell me twice!